This is the 5th post in this IKE series. You can find the other posts of this series from the following:

The Packet 1 contents are very similar to the one in PSK Aggressive Mode. Just the authentication method in SA Proposal here is "RSA signatures".

Before sending the 2nd Packet, the Responder will need to figure out which cert will be used for generating the SIG_R and sent to the Initiator for identity validation.

In Main Mode, Initiator sends its cert first. So Responder can decide which cert to be used for this IKE session based on either the IKE ID of the Initiator or the Initiator's cert elements (such as Issuer's CN or Subject OU).

But in Aggressive Mode, Responder has to send its cert first. And because it has not receive the Initiator's cert at this point, it can only make the cert decision based on the Initiator's IDii.

Once the Initiator receives the 2nd packet, it will validate Responder's Identity by checking the SIG_R. If everything is ok, it will send out the Packet 3 including its own cert and SIG_I.

After exchanging these three packets, the Digital-Sign Aggress Mode Phase 1 is completed.

Doesn't like in PSK, in Digital Signature authentication, IDii is no longer limited to IP address. The Main Mode which is consider to be more secure are highly recommended. And the Digital-Sign Aggressive Mode is less preferred.

The pacp file for a example of Digital-Sign Aggressive Mode can be download from the following link:

In the next post, we will discuss about the Quick Mode which is the Phase 2 in IKE.

This is the 4th post in this IKE series. You can find the other posts of this series from the following:

In the previous posts, we went through the Pre-Share Key IKE phase 1 establishment for Main Mode and Aggressive Mode. In the following posts, we will find out IKE process in Digital Signature Phase 1.

Same as Main Mode, the 1st packet from Initiator contains the CKY-I and CKY-R (all 0s) in the ISAKMP Header. In the Payload, it has the SA proposal(s) and the NAT-T sign.

And of course, the SA proposal Authentication Method is "RSA signatures". 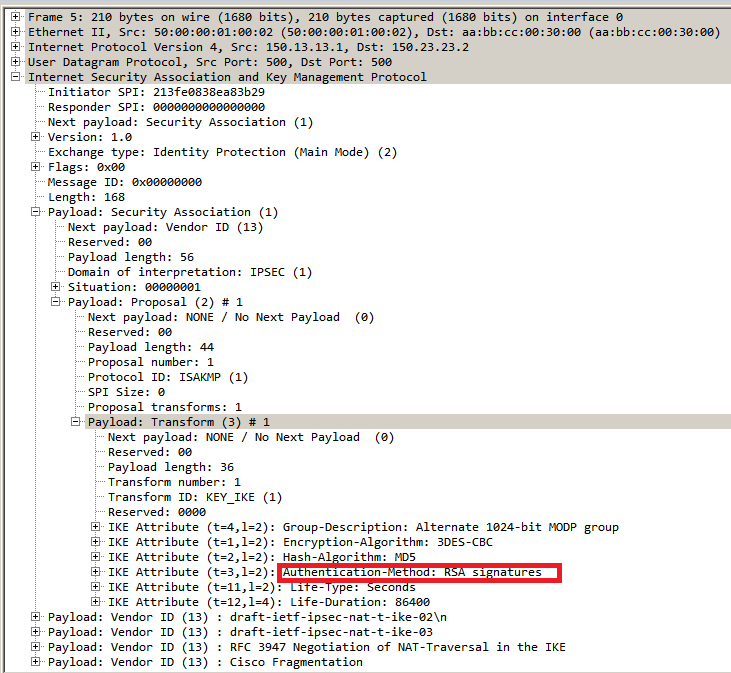 In Packet 2, Responder replies back with its CKY-R value and the chosen SA and NAT-T enable sign.

In Packet 3, the DH public key (g^xi), Nonce (Ni_b) and the NAT-T hashs will be sent from Initiator.

And at this point, SKEYID can be generated. The SKEYID in Dig-Sign Main Mode can be created from the following:

And other 3 keys can be generated from the same methods as PSK Main Mode:

We can use Dig-Sign Main Mode for the scenario which the remote peer doesn't have a static public IP.

Also, after the Packet 3 and 4 exchange, the Initiator and Responder will complete the NAT-T detection.

Comparing to the PSK Main Mode, the 5th packet has a very different payload. It contains the Certificate of the Initiator and the SIG_I.

* SAi_B is the entire body of the SA payload
* Priv_I is the Initiator's private key.

Once the Responder receives the Packet 5, the following happen:

Similarly, IDir, Cert of Responder and SIG_R are included in the Packet 6 from Responder to Initiator.

And Responder's Identity will be validated in the same way as in Packet 5.

In the next post, we will discuss the process in the Digital-Signature Aggressive Mode. Stay tuned!

This is the 3rd post in this IKE series. You can find the other posts of this series from the following:

In the previous post, we went through the Phase 1 of PSK Main Mode. In this post, we will take a look at the PSK Aggressive Mode.

PSK Aggressive Mode:
In Aggressive Mode, only 3 packets will be exchanged between the Initiator and Responder.  It is much simpler then the Main Mode,. However, in Aggressive Mode, some information are exposed in a clear message (not encrypted) and this may cause some security issues. But for some particular scenarios, Aggressive Mode is the only option.

In the 1st packet, the ISAKMP header contains:

In the payload, it contains:

Different from Main Mode, the IDii is transmitted in clear text. This make Aggressive mode less secure than Main Mode.

Before assembling the 2nd packet, the Responder needs to generate the SKEYID (seed key) and other 3 keys:

If you are not familiar with these keys and the elements in the "prf", you can go back to the 2nd post of this IKE series and there are detailed descriptions for them.

When these keys are ready, it can start assembling the packet.This 2nd Packet is also in clear text.

In the Packet Header, the value of CKY-R is added.

In its payload, it contains the following values:

SA: If Responder accept the Initiator's SA proposal, it will reply with the same SA

Nr_b: This is the nonce, the random number

IDir: The ISAKMP ID of the Responder

Similarly, Initiator will generate the SKEYID and other 3 keys. HASH_I value will be calculated based on these keys:

Detected Responder's IP/port HASH, Initiator's IP/port HASH: Up to this point, both Initiator and Responder have their own IP/Port Hash and the peer's detected IP/port Hash. They can figure out whether the peer is behind NAT and whether NAT-T is in used.

Also, please be noted that the 3rd packet is the only encrypted packet in the Aggressive Mode. SKEYID_e and the Encryption method in the SA will be used to encrypt this packet by Initiator.

After exchanging these three packets, the PSK Aggressive Mode IKE phase 1 is completed. A captured pacp file which can demonstrate this process can be download from the link below:

In the next post, we will work out how the Digital Signature Main Mode work. Stay tuned!


This is the 2nd post in this IKE series. You can find the other posts of this series from the following:

In every IKE main mode, there are 6 messages transmit back and forward between the Initiator and Responder in phase 1.

The 1st packet is sent from Initiator to Responder. Its ISAKMP header contains the IKE SPI (CKY-I) of the Initiator and the IKE SPI (CKY-R) of the Responder is blank (all "0s"). The IKE proposals are included in the payload of this packet. Also a payload of "Negotiation of NAT-Traversal in the IKE" as a NAT-T enabled indicator.

In the 2nd packet, Responder will add its ISAKMP SPI (CKY-R) in the ISAKMP header. Its payload will include a chosen IKE policy set and a "NAT-T Negotiation" sign.

After exchanging the first two packets, the Initiator and Responder will a have a common IKE policy with Authentication method, Encryption method, Integrity check method and DH group set. And, they will have agreement on whether NAT-T is enabled or not.

From now on, all the ISAKMP message headers in the same ISAKMP SA will contain the same CKY-I and CKY-R.

In this step, the Initiator use the selected DH group ( from IKE policy negotiation) to generate a DH private key and public key (g^xi). Also a nonce (Ni_b) which is a randomly generated number used in key generation will be created.

All of the above values will be sent to the Responder in the packet payload.

Hash of detected Initiator's IP/port and Responder's IP/port will be calculated.

And these values will be sent to the Initiator.

Up to this point, a common DH shared key (g^xy) can be calculated by both parties. The way how the shared key is generated is shown in the following diagram:

Also, they finished the NAT-T detection at this point. For example, of the Initiator knows it's own IP is 192.168.1.10 but the "detected Initiator's IP" received in Packet 4 show its IP is 1.1.1.1 (public IP), then it knows it is behind NAT and port UDP 4500 will be used for IPsec SAs. Otherwise, if the local IP and the remote detected IP are the same, then ESP will be used for IPsec SAs.

After exchanging the first 4 packets, both parties will have the following:
And before sending the 5th packet, both parties need to do some math calculations.

And based on this SKEYID, 3 different keys are generated:

UP to this point, both Initiator and Responder share the above 4 keys and they can use these keys for the remaining phase 1 and phase 2.

The Payload of packet 5 is encrypted by the chosen Encryption method (such as AES) and the the key (SKEYID_e). So the Responder decrypt this packet with SKEYID_e and obtain the HASH_I. And then, it compare this obtained HASH_I to its computed HASH_I and validate the identity of the Initiator.

Similarly, Responder will send the IDir which is its ISAKMP ID and the generated HASH_R to the Initiator.

And the payload is encrypted by the chosen Encryption method and SKEYID_e.

The Initiator will also validate the identity of the Responder by comparing the obtained HASH_R to its own computed HASH_R.

In the next post, let's find out what's the difference in PSK Aggressive mode.

Thanks for the VPN configuration templates/Wizards provided by Vendors, network engineers can build a site to site VPN tunnel by inputting the required parameters to the edge router/firewalls. All the heavy lifting behind the scene can be completed by those vendor box. However, the reality is that deploying IPsec VPN is never easy especially when connecting to a 3rd party endpoint. So, if you want to deploy VPN solutions smoothly, understanding the secret behind the screen for IKE become necessary.

In the following of post series, I would like to talk about the how the IKE works in both PSK and Signature authentication mode. But I will only focus on describing how the different elements of IKE work together. The math calculation is not focused here.

Here are the list of all the posts in this series:

Before our journey begins, I would like to raise two questions and let's see if we can find the answers from the up coming post.

First of all, I put all the IKE elements for building a IPsec tunnel into several charts. It will help you to understand how they work together. You can download the chart from the following link:

And now, let's find out the secrets about the IKE structure. As we know, IKE (Internet Key Exchange) contains two phases.

In IKE phase 1, information such as Authentication method, Encryption method, Integrity check method, DH group will be negotiated between Initiator and responder. Also, DH Group public keys and nonce will be exchanged between these two parties. Then these two parties will verify the identify of the peers and then calculate the keys for encryption and integrity check individually. Once the IKE phase 1 is completed, a IKE SA will be formed. This is the secure channel for IKE phase 2 negotiation and IKE DPD (Dead Peer Detection) check later on.

In IKE phase 2, the IKE payload is encrypted with the key generated in phase 1. Encryption method, Integrity check methods, PFS DH group (optional), Proxy IDs on each ends (source, destination IP/subnets in the SA) will be negotiated in phase 2. when both of the initiator and responder found the acceptable combination of the above items, IPsec SAs will be built. Each pair of source/ destination proxy ID will form two IPsec SAs, one for each direction. The data traffic using these proxy IDs as source/destination will go via these IPsec SAs.

In the next post, I will talk about the message exchanges in PSK Main mode & Aggressive mode in more depth. Stay tuned.

Load Balancing is one of the features provided by the NSX Edge Services Gateway (ESG). It can provide L7 Load Balancing by utilizing the HA...